Supplying Twinfall Lifeboat Solutions for all your Maritime needs.

With our 50 years’ history and the best safety track record in the life saving industry, SSI has used our extensive knowledge and experience to develop the world’s safest twin fall lifeboat system. By utilising the inherently safe Triple 5LX Hook Release Mechanism in our chosen twinfall lifeboat models we are able to offer enhanced load over centre safety at affordable prices. 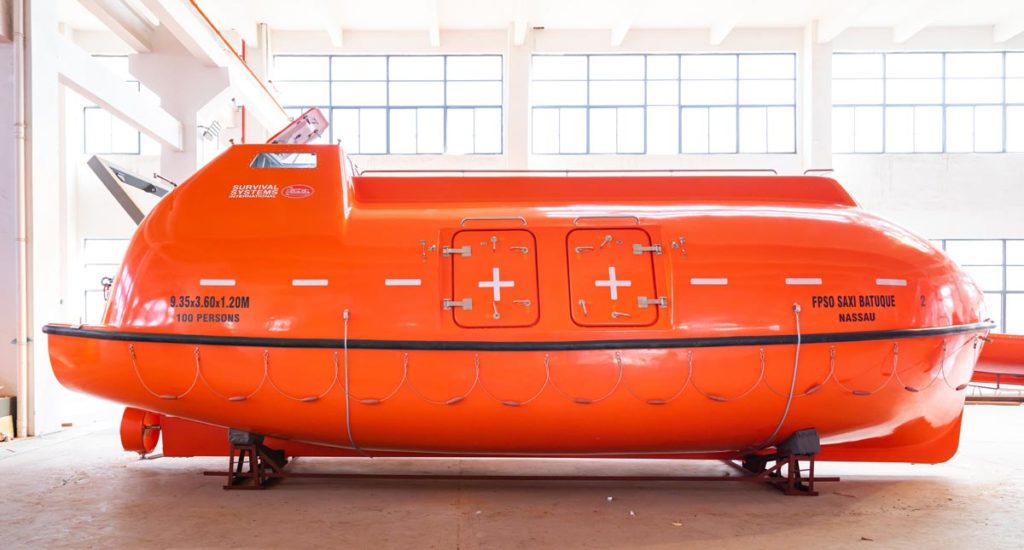 Meet the SSI T5 Twinfall lifeboats. Our new Twinfall lifeboat series is ideal for offshore vessels and merchant vessels – including oil and gas tankers, as well as dry cargo vessels. Designed for use in harsh conditions, the T5 Twinfall lifeboats are constructed using the right materials for the corrosive marine environment. This ensures a long and trouble-free operational life, with minimal maintenance required in between servicing periods.

Whether a lifeboat is brand new, or has been in service for a while, its hooks and hook release system are critical to safe operation during tests or emergencies.

By utilising the inherently safe Triple 5LX Hook Release Mechanism in our chosen Twinfall lifeboat models we are able to offer enhanced load over centre safety.

Our Twin-fall lifeboats are proven out in the field with more than >10,000 installations since late 1980’s, across a variety of assets onboard marine and offshore vessels.

All our Twin-fall lifeboats are compliant with the latest IMO/SOLAS LSA codes and regulations. Our hull is hand laminated to ensure durability and strength and fitted with high grade 316L stainless steel.

Reset Hooks from the Hellman's Position

The Triple5LX Hook System uses high strength, maximum efficiency push / pull cables connected directly to the hooks. This allows the hooks to be RESET as well as opened from the safety of the helmsman’s position.

If you have an enquiry with regards one of our Twinfall Lifeboats please fill in the enquiry form below and we will reply with 48 hours.

TEMPSC is an acronym for "Totally Enclosed Motor Propelled Survival Craft", which was originally designed for offshore oil and gas platforms in 1968. The first-ever TEMPSC was spherical in shape, had a flat bottom, a single hook, with a total passenger capacity of 28-passengers. It was manufactured by the Brucker Life Sphere Company, owned by its creator Mr. Milton Brucker.

The first TEMPSC was called the Brucker Life Sphere, but was later referenced as a "TOTALLY ENCLOSED, MOTOR PROPELLED SURVIVAL CAPSULE".

The United States Coast Guard coined the acronym "TEMPSC" during the process of evaluating the Brucker Life Sphere for approval and adherence to SOLAS 1960. At that time, TEMPSCs did not exist and the IMO SOLAS description of a lifeboat was that of an open dual hook lifeboat that were only installed onboard ships. The USCG's approval of the Brucker Life Sphere formaliSed the acronym to TEMPSC (Totally Enclosed Motor Propelled Survival Craft) and submitted it to IMO as a proposed amendment to the SOLAS 1974 convention. This proposed amendment added the TEMPSC design characteristics to the SOLAS rules.

NOTE: Totally Enclosed Lifeboats did not become a requirement until the SOLAS1983, Chapter III amendment, which made TEMPSC required on merchant vessels, tankers, MODU's, Floating Offshore Oil and Gas Platforms and some fixed platforms built on or after 1 January 1986. This amendment also required the TEMPSC to have an On-Load Release Gear mechanism(s) or hook(s), which allows the lifeboat to be capable of opening the hook while under load or suspended from the winch cable prior to becoming waterborne.

Although the original TEMPSC was a single hook capsule exclusively designed for use on offshore oil and gas platforms, SOLAS 1983, chapter III amendment forced all lifeboat manufacturers to change their open lifeboat designs to a TEMPSC. As a result, currently all TEMPCs (with one or two hooks) are commonly known as lifeboats capsules.

In the event of an emergency, that requires evacuation of the offshore installation, TEMPSC are relied upon for mass evacuation of all personnel on board. TEMPSC are considered the primary method of evacuation during an emergency situation that requires evacuation of the facility due to catastrophic conditions where evacuation by helicopter, standby vessel or a catwalk to an adjacent platform is not possible. Evacuations could be a delayed onset, where the personnel have ample time to evacuate the facility. An immediate onset, is an emergency situation that require immediate evacuation due to extreme fire, explosion, gas release, severe weather, etc. In all of these cases, the offshore workers can deploy the TEMPSC into the sea and maneuver away from the platform or danger area and call for help from a nearby by platform or emergency response vessel or coast guard.

Any cookies that may not be particularly necessary for the website to function and is used specifically to collect user personal data via analytics, ads, other embedded contents are termed as non-necessary cookies. It is mandatory to procure user consent prior to running these cookies on your website.